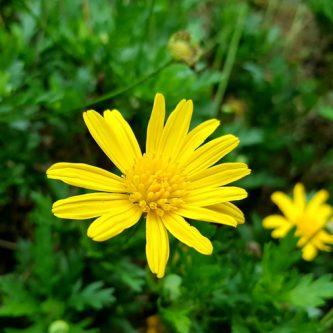 In flower June to October

Most often found as an arable weed, but it can also be found on other disturbed sites such as rubbish tips, road verges, waste ground and even over-grazed pasture. 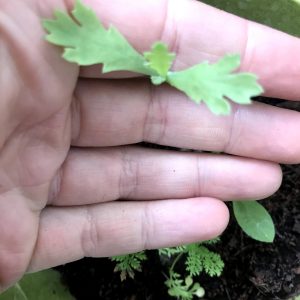 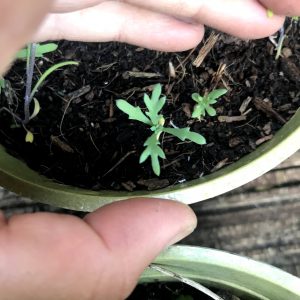 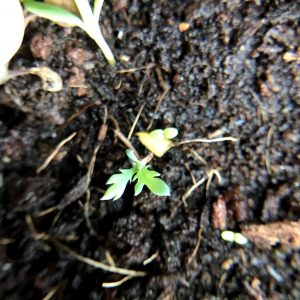 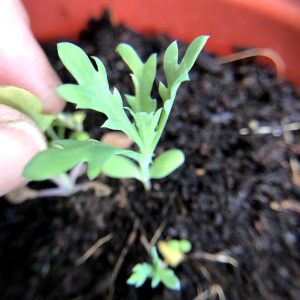 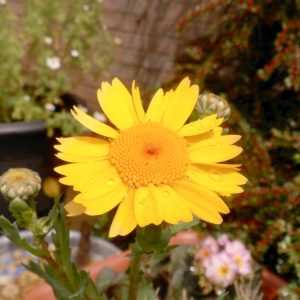 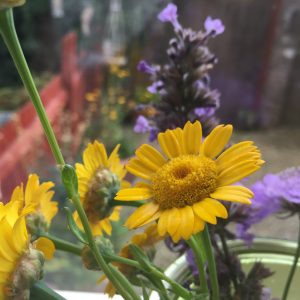 Description
Although the bright yellow flowers of the corn marigold were once abundant in cornfields throughout Britain, it is not a true native, but was probably introduced in ancient times with grain. Its original home is probably western Asia and the area of the Mediterranean. Since it has been found in, but no earlier than, Scottish neolithic deposits, it probably arrived with the neolithic introduction of agriculture.

How to spot it
Of medium height, the flowers, which are golden-yellow discs with prominent ray florets, are borne singly on the ends of the stems. The leaves are deeply toothed, slightly fleshy, lobed, hairless and covered with a waxy layer that gives them a greenish blue-grey colour.

How’s it doing?
It was a serious weed in Victorian times, but is now much reduced due to improved seed cleaning, liming, herbicides and the shift to autumn-sown crops. Much of this decline has taken place since 1930.

Did you know?
It is a good plant for bees, butterflies and moths, and is the food plant of the Chamomile Shark Moth. In the east the young shoots are eaten as a vegetable, particularly in China. It was a familiar sight in 16th Century English gardens.

In his 1640 Theatrum Botanicum, John Parkinson described the use of corn marigold into midsummer garlands and hung up on houses.

There are plenty of associated Anglo-Saxon place-names such as Goldhanger in Essex, Goldor in Oxfordshire, Golding in Shropshire, Goltho in Lincolnshire and Gowdall in the West Riding.

Grigson remarks on not only the charming green and yellow of corn marigold but also ‘the oddly attractive scent of the flowers’.