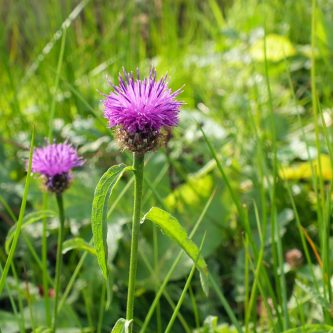 Knapweed is a wild flower of meadows and other grassland habitats from lawns to cliff-tops. It can often be seen on road verges where wildlife is allowed to thrive and also in hedges.

Also known as “Hardheads” or “Black knapweed”, this wild flower is one of our toughest meadow plants.

Knapweed is a firm favourite of our pollinating insects, being a source of good quality nectar. And as well as supporting our bee, butterflies and beetles its seeds provide food for many birds.

Identification
Somewhat thistle-like, common knapweed can be identified by its slightly spherical black/brown flower head, growing alone, topped with an inflorescence of purple, pink or (more rarely) white. The bracts are triangular in shape. Its leaves are linear to lance-like in shape with incomplete lobes. Greater knapweed – a close relation – is similar but its flowers are more garish and opulent and its leaves are fully lobed.

Did you know?
In days gone by eligible young women would play a love-divination game by pulling out the rays and putting the plucked knapweed flower in their blouse. When as-yet unopened florets began to bloom it would tell her the man of her dreams was near. This game to foretell the future of love is also played with Plantago major.

Most of the local names including Bachelor’s buttons, Blue bottle and Iron knobs are explained by the hard, knobby heads, the bottle-shaped involucre and the toughness of the plant. 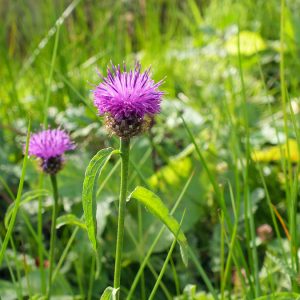